The Science of Head Lice

We all know someone who has suffered through head lice. Whether it was yourself or someone close to you, we've seen the stress and toll head lice can put on a person and family. The good news is the more you know about head lice- the easier it is to keep them at bay. Let's dig into the science behind head lice and learn how you can be prepared when they come your way.

Pediculus humanus capitis is the scientific name for head louse. Louse is the singular term for head lice. The symbiotic relationship between a human and head louse is parasitic, meaning they must feed off a human host to survive. Head lice gain energy from the blood of their hosts several times a day in order to survive and reproduce. Without a host, the louse will quickly parish. The louse life cycle is short but productive. Female louse will lay egg, or nits, near the scalp. Nits only take about a week to hatch and females can lay up to 8 nits per day. After hatching, the louse is called a nymph. This is related to the child to teenage stage of life. A nymph will molt three times leaving behind debris before becoming an adult. Once the louse reaches adult hood, they will live up to 30 days.

The good news is lice are not known to transmit disease; most infections occur from excessive scratching. It is estimated that between 6 and 12 million infestations occur in the United States annually. Infestations most commonly occur in those ages 3 to 11 years old. This is thought to be because of the amount of close contact between children during play times and at schools. Children tend to have less awareness over boundaries than adults. Since head lice must crawl host to host, direct contact is the most frequent way they are spread.

Traditionally, head lice have been treated with various over the counter methods, or by nitpicking methods. These treatments relied on the use of pyrethrins – a harsh chemical that is toxic to insects – along with multiple treatments. These methods worked until super lice began to appear. Super lice are resistant to chemicals and are not affected by their treatments. At Lice Clinics of America, we use our signature AirAllé treatment that kills all lice including super lice and nits. We don't use any harsh chemicals. Instead, we use heat to dehydrate and kill lice. We also back our treatments with a lice free guarantee!

Don't let head lice leave you overwhelmed and confused. Learn the science and facts behind head lice and stay lice free! Remember Lice Clinics of America is here to help with all your lice needs from advice to treatments!

Lice Clinics of America has successfully treated 650,000 cases. The company has over 300 clinics in 35 countries, making it the world’s largest network of professional lice treatment centers. Lice Clinics of America - Pearland is located at 4420 Broadway Street, Pearland, Texas 77581 and is open Monday - Sunday by appointment. Call 281-746-6397 or email: info@theliceremovalclinic.com or visit www.theliceremovalclinic.com for more information or to schedule an appointment.

Do I have Head Lice?

Why Shaving Your Head Won't Get Rid of Head Lice

Talking to Other Parents About Head Lice 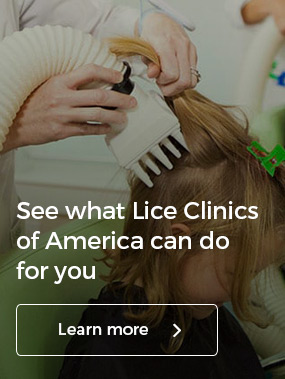